Currently the National Co-ordinator for Protect and Prepare under the CONTEST strategy, based at the National Counter Terrorism headquarters at New Scotland Yard. He is a senior Investigating Officer with extensive working knowledge in homicide and counter terrorism investigations having led over 50 murder and Counter Terrorism enquiries. As a SO15 Senior Investigation Officer and former head of Scotland Yard SO15 forensic management team, he is experienced in bomb scene management and disaster victim identification having been a senior Identification manager for over 12 years. Scott has delivered training at a number of educational and police academies together with conferences in the USA, Norway, France, New Delhi and Oman on a wide range of subjects inc Counter Terrorism, Scene management, CBRNe and Strategic Crisis Management.

In 2010, he led the MPS Counter Terrorism and Senior Identification Team in New Delhi in support of the Commonwealth Games. In 2010 as a Detective Chief Superintendent, he was appointed head of Emergency Preparedness, Business Continuity, CBRNe and DVI for the Metropolitan Police. In 2012, he led the MPS as Bronze Commander for the Olympic and Paralympics Games. Scott was responsible for multi-agency emergency planning for all 26 sporting venues and delivery of the testing and exercising programme.

As chair of LESLP between 2010 and 2013, Scott delivered the 8th edition of the LESLP manual incorporating Lady Justice Hallett recommendations prior to the commencement of the Olympic Games. He has advised the Norwegian authorities on blue light inter- operability following the review of the Andres Brevik case, and Police Scotland in advance of the 2014 Commonwealth Games. He currently sits on the programme board of JESIP and is responsible for CT military liaison and major event planning. He is also executive head of the National Counter Terrorism Security Office. He is also in charge of the UK International Protect and Prepare Unit which is working in seven key countries throughout the world.

Scott has a Master Degree in Critical Incident Management from Middlesex University and is a Fellow of the Institute of Civil Protection and Emergency Management. He is also an Associate lecturer at the Cabinet Office Emergency Planning College. In 2016 in San Diego he was awarded the 9/11 International Police Medal for Counter Terrorism. Scott is the UK Police representative on the Global Counter Terrorism Forum and has been commended on 16 occasions during his career.

A British National resident in the United Kingdom of Great Britain & Northern Ireland. He is a first-generation migrant from Cameroon, West and Central Africa and communicates in both English and French. He is the Founding Director of the Conflict Prevention and Resolution programme – Step In Step Out (SISO) Glocal and a pioneer member of the European Violent Prevention Network (VPN) hub – A pilot project set up to empower local community frontline practitioners in Europe on tackling radicalisation that leads to extremism and violent extremism

He is now the senior Advisor, Programme designer and Director of Counter Terrorism and Organised Crime for Global Risk International Ltd. In 2016, David was appointed on the board as Senior Advisor for Global Counter terrorism by the International Police Commission (IPC).

David Otto is a NATO recommended Counter Terrorism Expert and lecturer for the NATO Against Terrorism programmes at NATO School. He is a pioneer expert for the Interpol Global Counter Terrorism Strategy set up by a group of 5 Globally accredited Subject Matter Experts to proffer Counter terrorism solutions at the 2016 Interpol General Assembly Private & Confidential – Bali Indonesia, alongside US Deputy Special Presidential Envoy for the Global Coalition to Counter ISIL at Department of State Lieutenant General (US Army, Retired) Terry Wolff.

Recently David Otto was appointed the institutional representative and subject matter expert (SME) of Israel-USA Security, Intelligence and Defence (SECINDEF) International consulting and collaborating global analyst of Observation Against the Terrorist Threat and the Jihadist Radicalisation (OCATRY) Israel. He is frequently invited by governments and large organisations as a proven SME to develop strategic visions and goals and convert strategic level abstract ideas into real operational plans and programmes in a complex, multi-cultural security environment in Europe, Africa and the Middle East.

His specialities involve strategic planning and design of local community Anti-Terrorism and Counter Terrorism structures, plans and policy integration and methodologies to enhance interagency and civil military relations. As a recognised expert on Africa terror networks and their Modus Operandi, David Otto set up the structure in 2017 with local community frontline actor Barrister Zannah Mustapha of Future Prowess Islamic Foundation – Maiduguri (Northern Nigeria) that led to the release of 82 girls kidnapped by Boko Haram in 2014 in Northern Nigeria.He has developed a broad Network in the Lake Chad Basin. 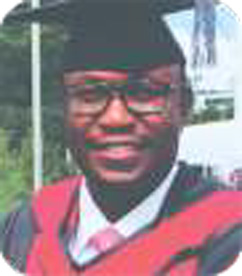 With a Bachelors in Accounting and Fraud Detection, Master’s degree in Forensic Audit and Accounting (USW) and more than 12 years of experience in the financial forensics and an educator in conferences and corporate workplace settings, Deji is uniquely positioned to tackling issues of digital fraud, having consulted for big firms, International Humanitarian Agencies and the Government as a Senior Partner Financial Forensics at A and D Forensics Consult, a firm he founded in 2010. He has travelled extensively and conducted training in many different countries both in Africa and Europe.

Wrote analysis in 2002 for the US Army, conclusion: Iraq most likely has no WMDs. Received special training, CAMP PEARY, Virginia. Made many appearances in national television and radio giving security, terrorism, geopolitics and business intelligence conferences. Created business plans for more than 10 countries and connected strategic business partners for L-3 Communications. Signed contracts for more than $2 million. Supervised more than 100 employees. Over 9 years overseas experience to include 5 years in Germany, 1 year in Afghanistan, and 2 years in Spain. Studied in Spain, Germany and England.

Was the personal advisor of the General in charge of strategic analysis of the National Police. Gave classes on trend and strategic level intelligence analysis to more than 60 senior analysts. Initiated and motivated institutional strategic level change in large and extremely important national organization. Received personal award from Minister of Interior.

Director Mexican Affairs /Senior Program Manager (Jul 2009- Jan 2011) GS 15, Department of Homeland Security, (Washington DC): Served as senior program manager coordinating a major DHS strategy and plan in order to secure Mexico’s southern border with Guatemala and Belize. Brainstormed a major strategy to be implemented by the US government in partnership with the government of Mexico. Advised the Assistant Secretary for International Affairs in extremely critical issues regarding US national security related to the US/Mexico border. Wrote briefing memos used by DHS Secretary Janet Napolitano in private meetings with the President Calderon of Mexico and President Obama. Traveled to Mexico many times to coordinate at the US Embassy in Mexico City and to liaison with senior Mexican government officials including VIPs from Mexican intelligence agency (CISEN). Composed initial draft and wrote the One DHS Plan to reduce the violence in Ciudad Juarez, Mexico, the first ever strategic level DHS Joint Operational Plan.