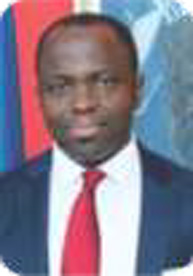 David Otto Endeley is a British National resident in the United Kingdom of Great Britain & Northern Ireland. He is a first-generation migrant from Cameroon, West and Central Africa and communicates in both English and French. He is the Founding Director of the Conflict Prevention and Resolution programme – Step In Step Out (SISO) Glocal and a pioneer member of the European Violent Prevention Network (VPN) hub – A pilot project set up to empower local community frontline practitioners in Europe on tackling radicalisation that leads to extremism and violent extremism

He is now the senior Advisor, Programme designer and Director of Counter Terrorism and Organised Crime for Global Risk International Ltd. In 2016, David was appointed on the board as Senior Advisor for Global Counter terrorism by the International Police Commission (IPC).

David Otto is a NATO recommended Counter Terrorism Expert and lecturer for the NATO Against Terrorism programmes at NATO School. He is a pioneer expert for the Interpol Global Counter Terrorism Strategy set up by a group of 5 Globally accredited Subject Matter Experts to proffer Counter terrorism solutions at the 2016 Interpol General Assembly Private & Confidential – Bali Indonesia, alongside US Deputy Special Presidential Envoy for the Global Coalition to Counter ISIL at Department of State Lieutenant General (US Army, Retired) Terry Wolff.

Recently David Otto was appointed the institutional representative and subject matter expert (SME) of Israel-USA Security, Intelligence and Defence (SECINDEF) International consulting and collaborating global analyst of Observation Against the Terrorist Threat and the Jihadist Radicalisation (OCATRY) Israel. He is frequently invited by governments and large organisations as a proven SME to develop strategic visions and goals and convert strategic level abstract ideas into real operational plans and programmes in a complex, multi-cultural security environment in Europe, Africa and the Middle East.

His specialities involve strategic planning and design of local community Anti-Terrorism and Counter Terrorism structures, plans and policy integration and methodologies to enhance interagency and civil military relations. As a recognised expert on Africa terror networks and their Modus Operandi, David Otto set up the structure in 2017 with local community frontline actor Barrister Zannah Mustapha of Future Prowess Islamic Foundation – Maiduguri (Northern Nigeria) that led to the release of 82 girls kidnapped by Boko Haram in 2014 in Northern Nigeria.He has developed a broad Network in the Lake Chad Basin.